I gave a try out today to a 1745 scenario using Sharp Practice (the Summer 2017 orbats). The chosen scenario was the High Bridge at Spean, 16th August 1745, the first action of the Jacobite Rebellion.

Three newly raised companies of the 1st Foot under Captains John Scott and James Thompson (with an imaginary Captain William Bailey) were ordered to march to Fort William to reinforce the garrison against expected attack.

Donal MacDonell of Tirnadis is determined to stop the companies at the High Bridge and is (probably) going to be supported by Donald MacDonnell of Keppoch and Glengarry of Laggan Achandrrom.

The land looks something like this (actually it really doesn’t but I don’t plan to build the highlands just yet): 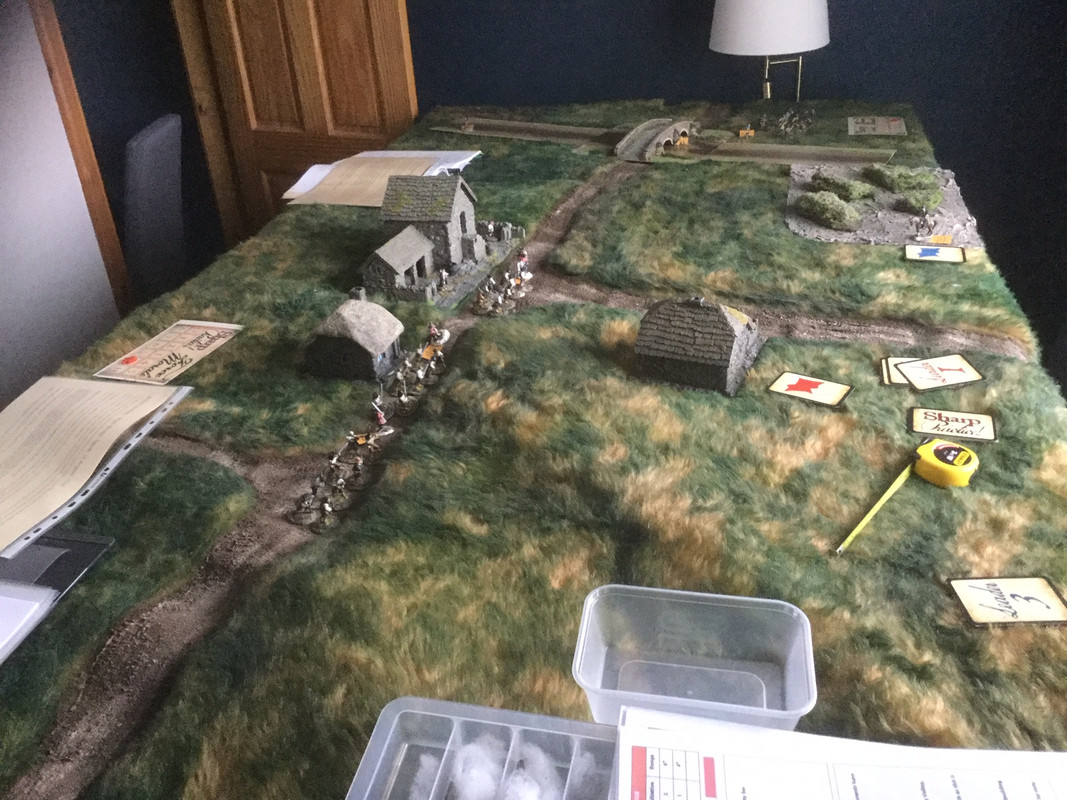 The Hannoverians are marching up the road and need to get at least one unit over the bridge without losing too many men. Their companies are raw, without coats, weedy coves and poor shots. The Highlanders, being wild and quite enthusiastic, must stop them.

The engagement started with some traffic jam on the road (caused by poor cards and laggardly men) and William Bailey’s company dawdled at the rear. Surprisingly both Jacobite supporting units turned up promptly top right in the rough ground and top left and Donal’s men advanced boldly over the bridge. 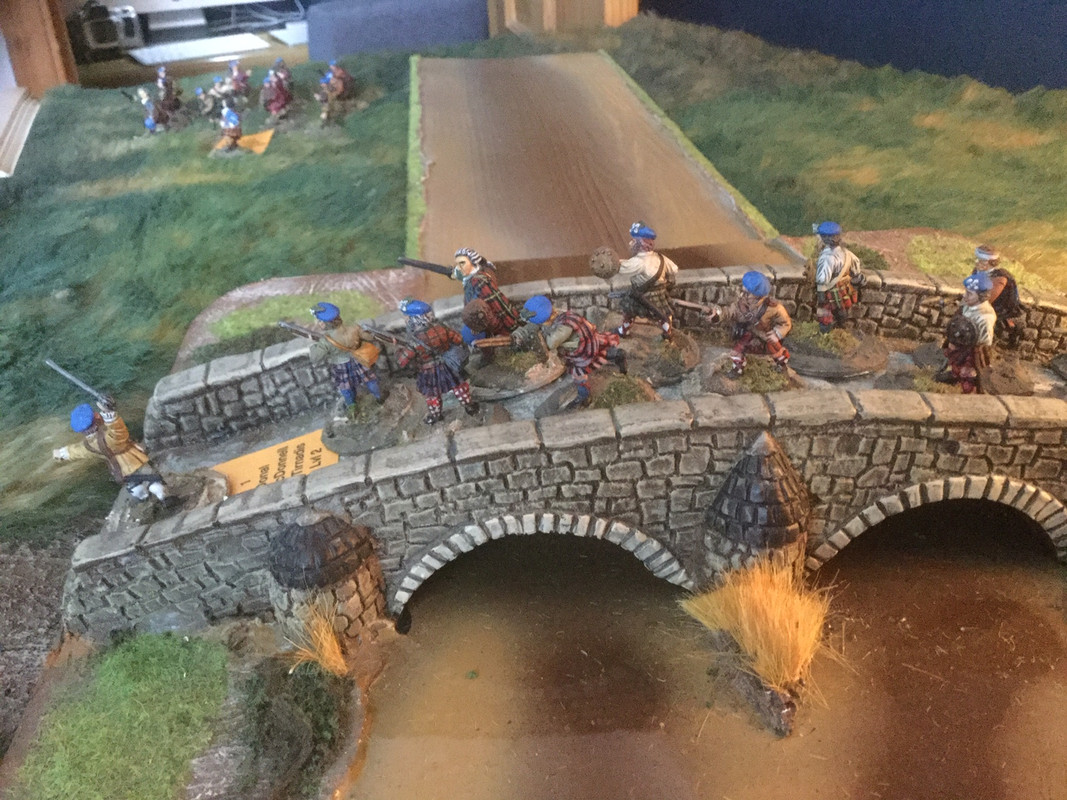 However John Smiths company opened up with a deadly first fire - delivering 8 shock and kept up a repeated fire on Donal’s men, whittling them down as they vainly tried to summon up the chutzpah for a Highland Charge

Thompsons company also gave first fire and killed 2 and shocked 3 of Glengarry’s mob, but
Glengarry had more luck persuading his men to Highland Charge (which allows the group to Fire then charge with 3xD6 of movement), but he must have left the lucky heather behind, only scoring 2 shock and failing to make contact with a low movement roll.

Keppoch moves up to support Donal but the cards do not work in their favour and frozen on the spot, they take another very effective volley from Smith’s Company, wounding Donal. The Highlander’s have a Prominent Leader characteristic, which means that if he’s wounded they roll twice on the Bad Things Happen table and consequently lose two points of Force Morale. 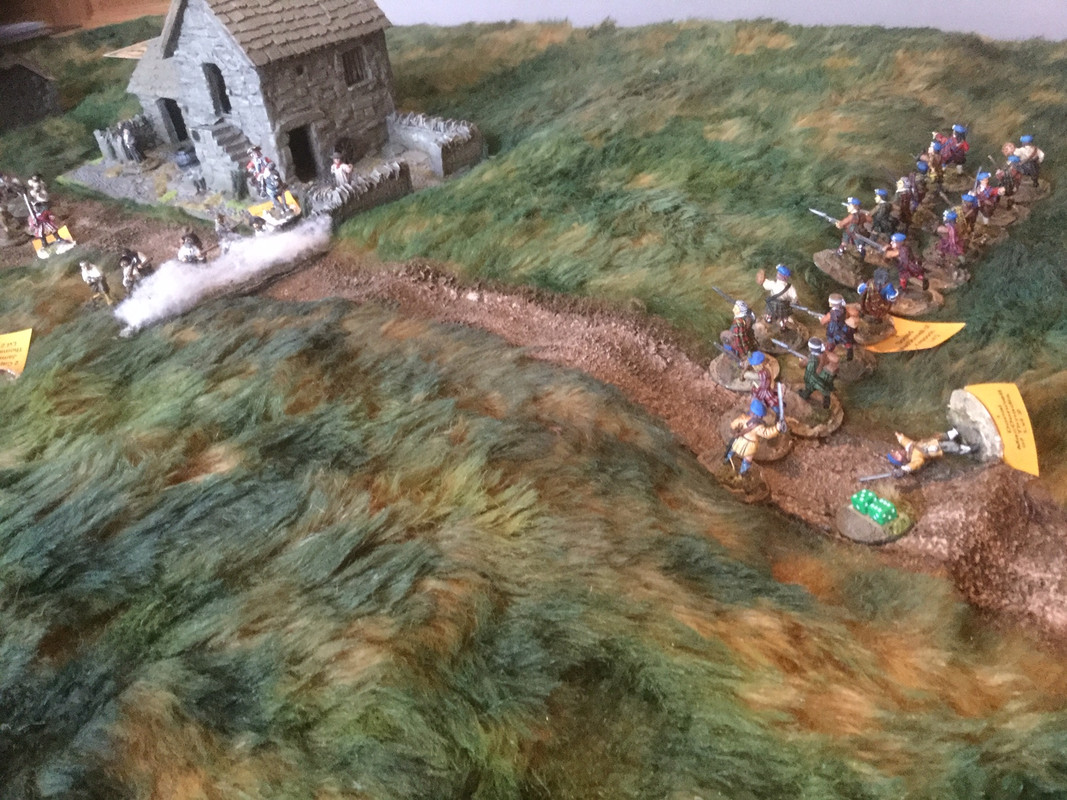 Glengarry succeeds in crossing the unexpectedly rough ground and makes contact with Thompsons company. He gains the benefit of Claymore, which gives him a massive advantage in the first round, which he fails to capitalise on! Thompson’s boys prove unexpectedly tough and force a second round of combat on more favourable terms. After a third round of Fisticuffs, Thompson pulls back in good order but Glengarry is forced to withdraw (more shock than figures left) and Force Morale drops again.

With Donal still down and bleeding, Smith’s men give a fourth devastating volley into his men, who break instantly and even abandon their wounded leader, fleeing back across the bridge. Enraged, Keppoch’s men pull off the Highland Charge, causing Smith’s mens knees to quiver in shock and then break as the Highlander’s tear into them, Smith is wounded and falls to the ground (it’s a bad day to be a senior leader!). 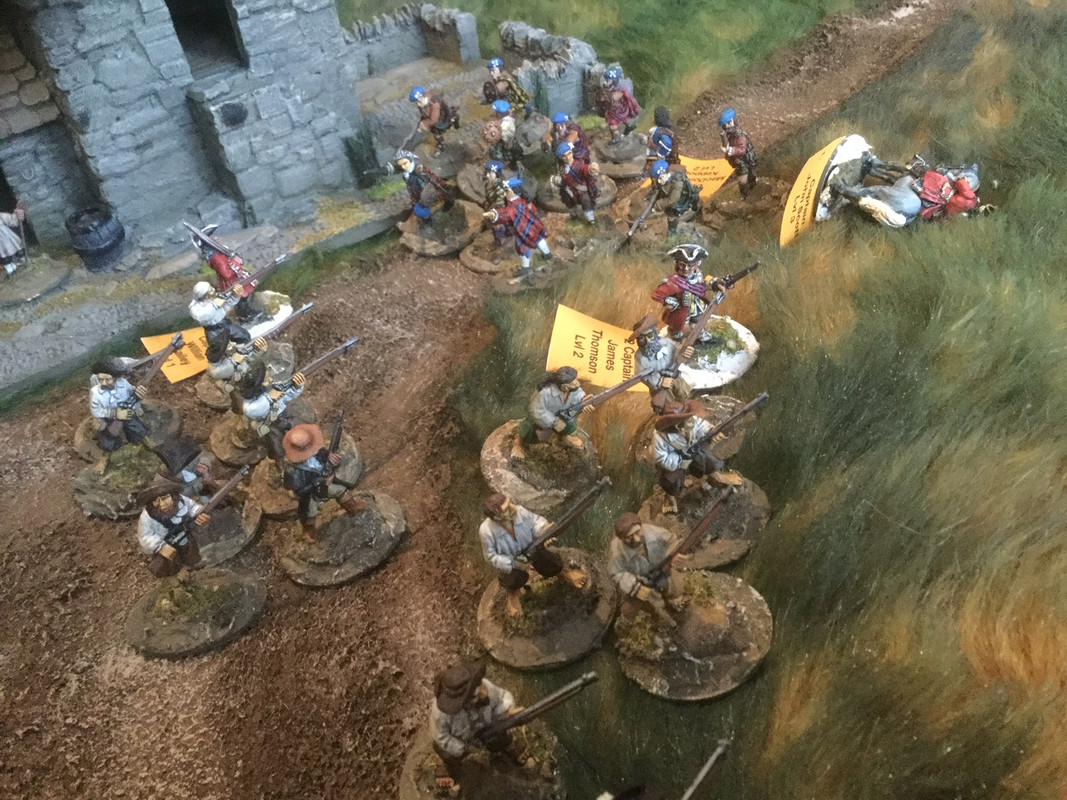 Flushed with success, Keppoch’s men advance to threaten Thompson’s flank but in the excitement of their Charge have thrown their muskets aside so can’t fire and fail to make contact. Fortune favours the Hannoverians as first Thompson adjusts his position and then the sluggard Bailey’s boys take aim and both fire into Keppoch at close range. But fortune does not extend to the dice, a mere two shock, Keppoch smashes into Bailey’s company and causes significant damage, forcing them to withdraw. Thompson keeps his head and fires into the flank of Keppoch as they pass, but their blood is up and the Highlander’s smash into Bailey’s boys again, who are slaughtered to a man, save for the ‘gallant’ William Bailey who succeeds in evading both death and capture.

Now faced front and rear by Keppoch and Glengarry and currently unloaded, Thompson has no alternative but to surrender and be marched off into captivity.

A very narrow win for the Highlanders, broadly in line with the actual history and Glengarry of Laggan Achandrrom will be boasting of his exploits well into old age.

Apologies for the general mess on the table but this was a try out of the force characteristics and the scenario. Overall it went well, the Hannoverians had some lucky die rolls plus fortunate card arrivals and threatened to win outright for much of the game, only losing at the very end. It bodes well for the rest of this project.
Turning Gold into Lead (and plastic, resin and slightly charred MDF)
Top

Very nice. Brings back pink fuzzy memories.
It seems a bit of a big ask for the Hanoverian scrot to achieve the objective against any opposition at all unless the cards are stacked in their favour but I suspect it was that way on the original day!
Love the tartans. Your painting?

Great stuff John, really good looking game and nice to see a bit of wargaming on here. Looking forward to the next encounter.
Top

Cheers Chris, yes, all my own work. I think we only played it the once, can’t recall if I wrote the scenario or nicked it from somewhere, but yes, it’s a tough ask - although the Hannoverians very nearly pulled it off this time, they had two out of three Jacobite groups beaten and pushed their Force Morale down to 5.
Turning Gold into Lead (and plastic, resin and slightly charred MDF)
Top

Looking good LT, if my tartans come up half as well, I will be very happy. I'm currently wondering about how I would depict heather and gorse on the table top. Will be trying a few test paints on some of the Highlanders while I'm waiting for the rest of the figures to show up.

Which set of SP stats did you use?
Top

What the Goat and the Count say....and the others of course.